Trinity Mirror has not sought permission from copyright owners to republish back issues of the Daily Mirror in electronic PDF format, EPUK has learned.

The move to republish a century’s worth of newspapers digitally – which would also allow third parties to reproduce parts of the pages of the newspaper – could be the largest breach of copyright ever attempted by a UK publisher.

The plans to make available electronic copies of the Daily Mirror is now at an advanced stage, and is expected to go live in around six weeks time, despite no licenses have been obtained from third-party copyright holders.

The move is likely to cause outrage among the thousands of freelance photographers and agencies whose work Mirrorpix will be reselling.

“I have to ask the question – has Trinity Mirror secured a licence to use freelance work in this way ?”, NUJ freelance organiser John Toner told EPUK. “If not, they are likely to infringe the copyright of many freelances and face huge bills for compensation.”

None of the Mirror contributors spoken to by EPUK had been contacted by the publisher to obtain a licence to reuse their work. Mirrorpix did not reply to repeated enquiries about whether it had sought permission to reuse third-party material in the new electronic editions.

· First launched on 2nd November 1903 by Lord Northcliffe as a newspaper aimed predominantly at women.

· Sunday newspaper Sunday Mirror was launched in 1915 as the Sunday Pictorial, changing its name in 1963

The service, offered by Trinity Mirror’s syndication division under the trading name of Arcitext will offer electronic versions of over 90% of Daily Mirror and Sunday Mirror/Sunday Pictorial issues dating as far back as 1903, with a total of 1.25 million searchable pages, all of which can be downloaded in PDF format.

However, Arcitext told EPUK that the archive was “90-95% complete” with further pages still being scanned. The file size of each page is described as “reproduction-quality” by Arcitext.

While the majority of the photographs which will appear in the archive will either be outside the copyright period, or will have the copyright owned by Trinity Mirror, a significant number will have been supplied for use in the print edition only.

Photographs most likely to be in potential breach will be those taken by freelances or agencies after the introduction of the 1988 Copyright, Designs and Patents Act. One picture desk source at Trinity Mirror told EPUK that there were likely to be “thousands, if not tens of thousands” of photographers affected.

While the Arcitext system will not go live until next January, certain subscribers have been given log-in details to test the system.

A demonstration seen by EPUK shows how a simple text query can return all relevant pages on which the text appears, and can be filtered according to date, prominence on the page, or by front page only. 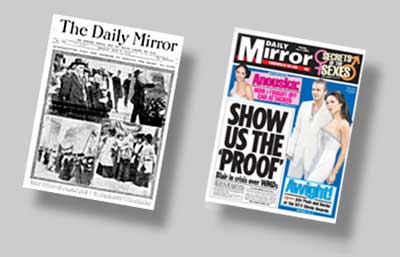 Users can then choose to add pages to their “Bookshelf”, see the whole newspaper in which the text appears, or download the page or edition in PDF format.

While older editions of the paper suffer a quality loss from having been scanned from the paper editions, more recent copies are of a quality higher than which appeared originally on newsprint, due to them have been taken from the original digital files as sent to the printing press.

Trinity Mirror insiders told EPUK that the project had been in development for over two-and-a-half years, with the website having been developed over the last year.

While the legality of republishing copyrighted work in an electronic format was upheld in a recent US court ruling, EPUK understands that a similar court ruling would be less likely to happen here.

In 2003, a US court ruled that electronic editions of National Geographic were “revisions” of the original print editions, and so did not infringe copyright of the photographers featured.

In a written submission, Judge Kaplan ruled “the evidence…compels the conclusion that the ‘further use’ provisions require additional payments only if a new use presents the contributors’ works in a context different than the magazine article in which they originally appeared.” The ruling was upheld after a 2005 appeal.

However, the crucial difference between the National Geographic case and the Arcitext plans is that Trinity Mirror plans to allow users to reproduce pages commercially. While the reproduction of a whole newspaper page for the purposes of criticism or review would be unlikely to infringe the copyright of any of the elements on the page, the reproduction of only one element of the page, such as a photograph, would require a license from the copyright holder.

What is unusual about the move is that the cost-conscious Trinity Mirror group has chosen to invest in its own database technology, rather than using the services of several existing companies who provide a similar service.

Market leader Newsstand offers digital editions of leading newspapers using a proprietary PDF-style format viewed via a downloadable plug-in. Subscribing newspapers – including the Daily Mail and Evening Standard – send their page-ready files to Newsstand over the internet, which are then available for download almost instantly. Prices to view the Evening Standard range from £2 for a week, to £50 for a year.

Newsstand’s contract says that subscribing publishers must indemnify it from any third-party copyright claims. This clause is believed to have been one of the factors which promoted Newstand-affliate The Scotsman to introduce its infamous rights-grabbing contract in 2000.

Other electronic publishers include Olive Software, whose clients include the Washington Post, and Zinio Systems who syndicate a large number of business magazines.

Hello.
I think it is great to get the older paper online.
In 1944 HMS Mahratta was on the center pages.
I never got to see that, because I was not born untill 1963.
But the cost must be kept down.

Anyone with information about The Sunday Pictorial, that has HMS Mahratta on the centre pages, can contact me at http://hmsmahratta.50megs.com and look for the email link.
Kieron