Reuters Editor-in-Chief David Schlesinger has revealed that an internal investigation at the global news agency which led to the sacking of a senior picture editor has blamed “human error” for the distribution of two digitally manipulated images.

Writing in his company blog yesterday, Schlesinger writes: “There was absolutely no intention on Reuters part to mislead the public.”

“Our swift, strong response, however, both in the days immediately following and in the months since, has strengthened our commitment to our trust principles and our reputation as a respected global news provider which acts with integrity and transparency. We have shown that when mistakes are made we take responsibility and make changes.”, he adds.

The blog article follows a speech last month in which Reuters CEO Tom Glocer told the Globes Media Conference that an internal investigation had concluded that the manipulation was deliberate, against the agency’s guidelines, but was motivated by “aesthetic, not political” reasons.

The extent of the embarassment caused by the incident can be seen in the careful wording of the blog, which makes no mention by name of freelance Adnan Hajj, nor of the specific incidents which brought about the scandal, which occurred during a time of unprecedented online scrutiny of alleged media bias during the coverage of the month-long Israel-Hezbollah conflict. 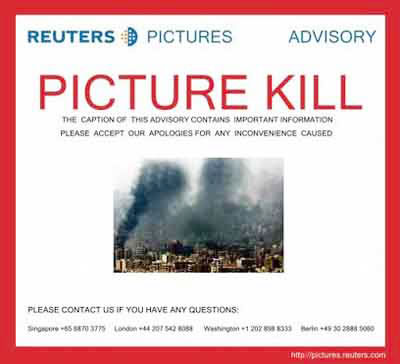 Parts of the new guidelines seem to indicate that Reuters may have accepted Hajj’s initial explanation for how the increase in the size of the smoke clouds occurred.

At the time, Hajj claimed that the alterations was caused erronously by using the clone tool to remove dust marks on the original image using his laptop in a dark environment.

The guidelines state that “removal of dust” is one such procedure that should now only be carried out by picture desks using calibrated, high resolution screens.

They go on to add: “Cloning, Healing or Brush Tools are not to be used. The single exception to this rule is sensor dust removal.” and adds “only minor Photoshop work should be performed in the field. (Especially from laptops)....Where possible, ask your regional or global picture desks to perform any required further Photo-shopping on their calibrated hi-resolution screens.”

However, other Reuters photographers placed strong doubts as to whether this was a plausible explanation. One former Reuters photographer spoken to by EPUK said it was “perplexing” why Hajj would have felt the need to add only slightly more smoke to an image which already showed severe devastation caused by Israeli air strikes.

“An amateur could have done better”

A greater embarassment for Reuters is that such an obviously doctored image was able to be passed by picture editors without the cloning being noticed.

At the time, then Telegraph picture editor Bob Bodman told the BBC: ““It was so badly done – an amateur could have done better”

During the conflict, Reuters had relaxed its procedures, allowing its photographers to file directly to its global picture desk, rather than filing via the Beirut desk, to enable pictures to be distributed more quickly.

Schlesinger writes: “[Reuters] were not satisfied with the degree of oversight that we had that allowed these two images to slip through.”

He notes that Reuters have “taken appropriate disciplinary action “ by sacking the Middle-East picture editor and replacing him with experienced Reuters picture editor Stephen Crisp.

Reuters have refused to name the sacked picture editor, but EPUK understands he is now working for a rival news agency.

Other measures introduced include revising the code of conduct for photographers, restructuring the picture desk workflow and ensuring that any potentially controversial images are approved by a senior picture desk member before being sent out.

After a second doctored image was discovered by bloggers, in which a Israeli F-16 fighter dropping a flare over Nabatiyeh in south Lebanon had two other flares digitally added by using a clone tool, all of Hajj’s images shot for Reuters over his 10 year association with the agency were removed from the company’s archive.

“No graver breach of Reuters standards”

Schlesinger makes no mention in his blog whether the 920 photographs taken by Hajj during his Reuters career had been examined, and if so, whether evidence of further manipulation had been found.

At the time Reuters Global Picture Editor Tom Szlukovenyi said: “There is no graver breach of Reuters standards for our photographers than the deliberate manipulation of an image”

In an interview, Hajj denied that the F-16 image had been digitally altered, saying “there’s no problem with it, not at all.”

The moves follow the announcement last month that Reuters was working with Canon to develop a digital authentication system which could detect whether an image had been digitally altered.

According to Schlesinger, an internal investigation of all other photographs filed during the last August’s conflict were examined by senior staff, and no evidence of digital manipulation was found.

However, the moves do little to address accusations of other, non-digital manipulation, such as scenes or objects photographed by Hajj and other photographers during last August’s Lebanon war were staged or set up. Critics have also pointed to images of bombed buildings in which emotive objects, such as childrens toys or religious texts, being photographed in convenient proximity.

This is really interesting content for beginner photographers. I hope that you will publish more similar articles. It would also be great to see even more of your articles with guides for photographers.