WATCH OUT! There’s a G4S about

As the world watches G4S attempt to protect the London Olympics David Hoffman worries that with its history of arrogance and mismanagement the security giant’s presence might sink photographers’ hopes of working freely during the biggest sporting event in the UK since the 66 World Cup.

G-Force is an animated film by Disney in which a specially trained squad of guinea pigs is dispatched to save the world. We should be so lucky.

As everybody now knows the similarly named G4S is no Disney fiction but an all too real “humiliating shambles” of a security company tasked with looking after the London Olympics.

Not so long ago “the world’s leading international security solutions group” was boasting that nobody cared if G4S controlled the issue of firearms licences in the UK and of its exploitative employment policies.

So it’s no surprise that many of the guards deployed on the low-end work of Olympic perimeter security at £8.50 an hour (after 12 days unpaid training) are drawn from the less-educated job seekers and have little or no experience.

It is just these guards that photographers are likely to be confronted with while covering events around the Olympics.

Photographers with accreditation for the Olympics already know that they can expect to be herded into bad positions, excluded from important events and treated like nuisances at best or as terrorists at worst. That’s pretty much par for the course and will come as no surprise to even the newest professionals.

Now the shambles that G4S have made of security for the London 2012 Games is likely to make matters far worse, and not only for accredited photographers.

Rather than deal with the nightmare mix of authoritarian arrogance and bureaucratic bungling that is LOCOG many photographers will choose to cover events that do not require accreditation, events that take place outside of the locked-down Olympic Park.

Private security firm “has no role outside of the Olympic Park”

In April the National Union of Journalists arranged a meeting with London’s Metropolitan Police. Photographers, already wary of the shoddy reputation of G4S, were concerned that poorly trained and aggressive security guards would interfere with their freedom to work in public spaces.

Assistant Commissioner Chris Allison and Commander Bob Broadhurst gave those present a well practised briefing. They detailed some aspects of the biggest UK policing operation in history, the £600m budget, the 1.8m prearranged individual police journeys and the 12 wonderfully named Gold Commanders who would make it all work.

Allison, in overall charge of Olympic security, was adamant that there would be no problem. G4S, he explained, would only work inside the park. Allison said G4S had no role in the public spaces outside and assured us that photographers working on public land outside the Olympic site would only have well-trained and professional police to deal with.

Had this been credible it would have been reassuring – but as it was it only served to make those present wonder if Allison really had any idea of how badly G4S security guards can behave. 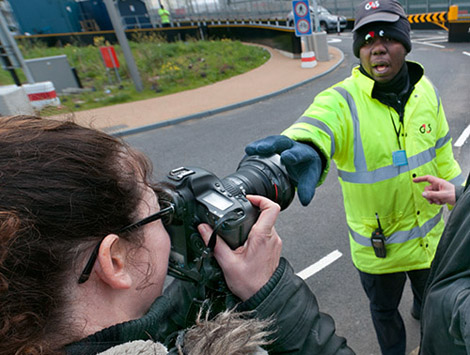 A walk on the riled side

After the meeting a group of five EPUK and NUJ photographers (of which I was one) decided to test Allison’s claim that G4S had no role in regulating photography from public land. We began a stroll round the Olympic Park. Before we had got half way round two G4S guards came running at us yelling that photography was forbidden, grabbing our cameras and assaulting several of our group. One guard ripped his ID off when he saw it was being photographed.

What was really disturbing was that this wasn’t a mistake. It was what they were trained to do. The guards’ manager justified the assaults saying “We are told we should refrain people from taking photos.” And, about one guard, “It’s his job to basically approach people and deter them from taking photographs.”

A senior G4S executive, Adam Mynott, called in by the NUJ to account for these assaults, described the G4S guards behaviour as wrong and incorrect but was unable to give a credible explanation for the manager’s admission that preventing photography was actually their job.

Another ‘wrong and incorrect’ incident revealed a far more serious hole in G4S’s security. A videographer walking on a public road near to the Olympic Park was twice stopped and made to account for himself by a G4S patrol in an SUV. Something that is entirely unlawful.

G4S have no authority to stop anyone in the street.

Either their training was inadequate or they were not being properly managed, probably both. Worse was to emerge when the NUJ raised the incident with G4S management. The union supplied the time, the date, the place and even a photo of the guard – yet for eight weeks G4S were unable to identify the guard or to confirm that he was a genuine employee or to produce any record of the stop.

When eventually G4S claimed it had traced the incident it was still unable to give any details about it, produce any record or justification for this unlawful behaviour or even to apologise for it. Given the Home Secretary’s description of G4S as “either negligent or deceitful, perhaps both” this lack of detail throws doubt on the truthfulness of their claim.

With G4S not knowing who is driving their SUVs, who is wearing their uniforms or what they have been doing while on duty they look more like a security hole than a security business. How can they be relied on to keep the Olympic Park secure?

Collect evidence while you work

We now hear that not only have G4S failed to provide at least a third of the guards that they had promised and were still promising just a fortnight before the opening ceremony but we are also seeing a deluge of reports of poor training and failed administration. The picture now is one of chaos and confusion needing the addition of 3,500 troops without civilian security training rushed in to fill the hole left by G4S’s abject failure.

Palmed off. G4S security outside the Hilton Hotel, London during a pre-Olympic event. Photo © Ian McIlgorm

So where does this leave photographers? We have several thousand squaddies, many fresh from the relaxing atmosphere of Helmand and now missing the leave they’d expected. We have 6,000 (or 5,000 or 3,000 – depending on how many actually turn up) poorly trained, randomly qualified, badly managed G4S guards. Most are new to the job, on short term contracts, badly paid, overworked, demotivated (would you turn up to be a laughing stock for £8.50 an hour?) and lacking adequate supervision. Some it seems may even be illegal immigrants.

Even before the pressure of the Olympic Games G4S guards have been assaulting and harassing photographers with their bosses apparently unable to control or even monitor them.

If there are protests – and that seems likely – then photographers would be well advised to keep a sound recorder running and to take plenty of pictures showing the security staff and their behaviour. Because if things do go pear-shaped – and who’d bet against that? – photographers will need all the evidence they can get.

It may actually be a god send that military personnel are being drafted in to replace the (apparently) underpaid and under-trained G4S contract staff. Having covered Wimbledon tennis for more years than I can remember, they have had plenty of military personal and I cannot praise them highly enough. The military staff make Wimbledon bearable – compared to the private security of such variable quality at so many other events I have covered.

Biggest sporting event since the ’66 World Cup? I don’t think so . . . You are forgetting the ’91 & ’99 Rugby World Cup tournaments that were held in the UK.

A senior training manager with wide experience of managing training institutes in the UK and abroad has told EPUK that he resigned from G4S recently because of the abysmal training standards within the company. A former military man, he said that he was wasting his time managing a training department for the security giant.

The former G4S manager stated that none of the accredited (G4S Train the Trainer certified) trainers under him met even the minimum standards to teach others. None of them had been assessed in person and none could manage a single coherent training presentation, he said. Driving trainers, for example, were themselves unable to change gear, reverse or undertake a hill start.

He received no response when he contacted his managing director about the inadequacies and after raising the issue at managerial meetings he was subsequently excluded from meetings that covered his remit.

His role, he told EPUK, was to churn out trainers to teach guards and drivers at the rate necessary to replace the ones that were leaving or being fired. G4S only got contracts because of its size, he said.

Because of its abysmal training, and aware that being part of G4S during such a high profile event as the London 2012 Olympic Games might be detrimental to his CV, he resigned from the company.