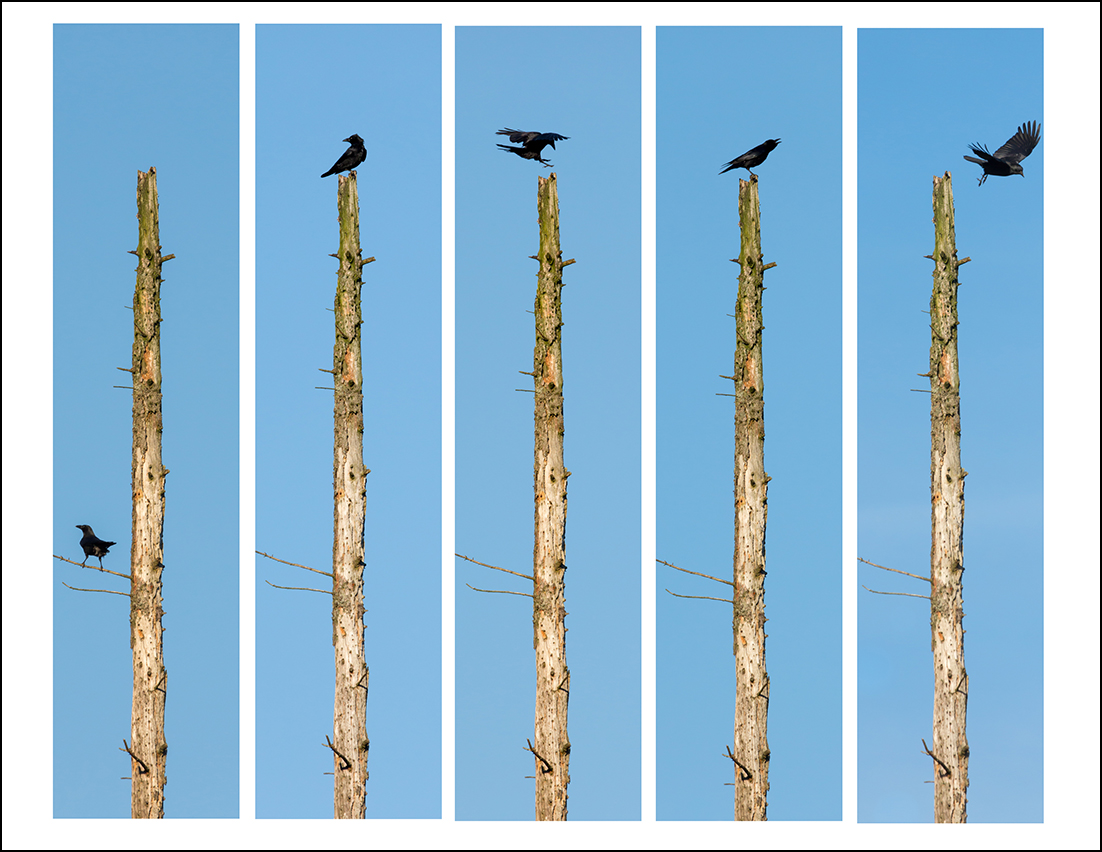 For many years I was a landscape photographer who watched birds. I then suddenly made the connection…why not actually photograph birds? But after all that time out in the landscape I found it impossible to avoid including their surroundings in the images. Most bird photographers do whatever they can to avoid giving their subjects any context at all, but I resolved to give both equal billing. I began work on an exhibition, Bird/land, and just to make it more difficult for myself, each “piece” consisted of three or five separate images in panoramic format, linked in some way with each other. The links consisted of location, species, activity, purely graphic elements, or a combination of two or more. I received funding from the Arts Council of Wales for the original showing of Bird/land in 2017 in Machynlleth. It then showed in an enlarged form at Aberystwyth Arts Centre in 2018.

These particular images were taken at a red kite feeding station near my home. There were no particular technical challenges involved, other than a long telephoto lens, a sturdy tripod and the right weather conditions. While waiting for the kites to perform I noticed that carrion crows were using this dead conifer as a perch while waiting their turn to grab some food. I took a series of images on two separate visits to the same location as different birds came and went. It was then a matter of selecting the images, processing, cropping as required and arranging them in a custom template in Lightroom to create the finished work.

Jeremy Moore began taking photographs as a teenager in the mid-1960’s as the last steam engines were disappearing from British railways. He then went to University and obtained a BSc in psychology in 1975. and moved to rural Wales in 1978, finding himself in a paradise for the wildlife and landscape lover. He worked in conservation on and off while at the same time developing his photography skills. He began publishing his own range of ‘Wild Wales / Cymru Wyllt’ postcards in 1987, and they have provided a bread-and-butter income for many years. He also worked for the Wales Tourist Board for a number of years but their unacceptable attitude to copyright put a stop to this. He then found a niche for himself as a landscape and increasingly wildlife photographer, working mainly on self-generated book and exhibition projects. He had a good relationship with a prominent Welsh publisher and produced a series of books for them between 1996 and 2012, usually in collaboration with an author. More recently every single avenue he found for earning an income has either disappeared completely or declined steadily, and he is now semi-retired. He still has a couple of projects he would like to get off the ground, though!