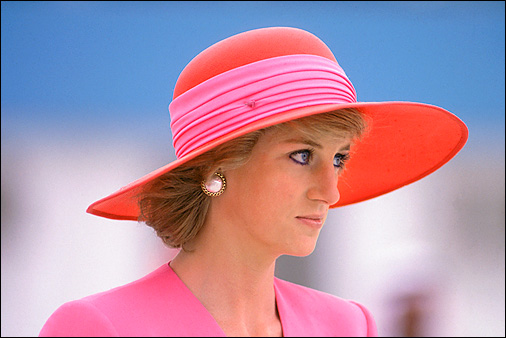 It was a balmy early evening in Kuwait in March 1989 when Princess Diana stepped off of the royal plane with Prince Charles.

As is the way, an official party from the receiving government was there to make the formal greetings. For Charles and Diana this involved much hand shaking with people they had never met before, followed by Diana being left to make small talk with strangers while Charles was marched off to inspect a military guard of honour.

As usual, the photographers ignored Charles and focussed on Diana.

Officialdom has a way of expecting photographers to work from a distance of a hundred yards or more from the Royals. It was no different in Kuwait where we were ushered into a remote pen. For once this worked to my advantage, as, by using a 300mm f2.8 with a two-times converter, I was able to make a tight portrait.

Luckily the elements came together as the colours, the soft, flat, evening light and the clean background combined with a moment when Diana was lost in her own thoughts, probably somewhere just this side of boredom.

In 1977 David Levenson went straight from school to Fox Photos to work as a photographer’s assistant. After three years he moved to Keystone Press then went freelance to specialise in Royal events for ten years. During the 1990s he shot news and corporate stories for the Black Star agency. David put his archive with Getty Images in 2004 and continues to shoot authors for the agency. David’s zines, Annual General Meeting, Britannia Coco-nut Dancers and British Rituals, are published by Café Royal Books.