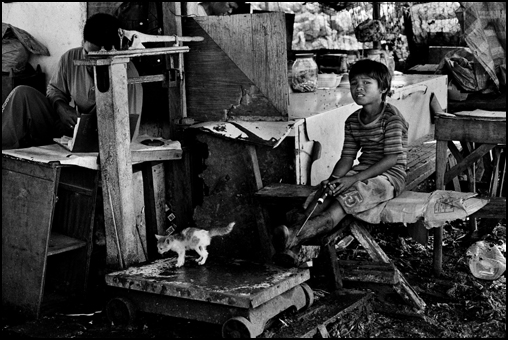 I was in the Philippines doing a reportage about religion and poverty in that country. I spent some time photographing people being crucified but I was much more drawn to the shanty towns where millions of ultra poor Catholics live.

Many thousands of people make a very meagre income working as scavengers in the huge garbage dumps. Thousands of children have to do this very dangerous work, and some die or are maimed by lorries or explosions of methane gas. I took this picture at a weighing station – this business of scavenging is highly organised. I like the picture because it seems to make connections – the girl is in human years about the same age as the kitten. And since the value of what is scavenged is usually judged by weight it as though society is valuing this girl’s life as no more important than the life of the kitten.

About two weeks after I took these pictures there was a huge collapse at Payatas and a guesstimate is that around 1,000 people died. Next day the Guardian used one of this set on Page One. I don’t think I have shot black and white since then.

Gerry McCann went freelance in 1984 and so is now in his twenty-fifth year. He has worked in at least twenty-five countries; sometimes at the sharp end – Romanian Aids babies and lepers, the divide in Gaza and the West Bank, war in Ethiopia, Sudan, and Somalia, Poverty and AIDS in Swaziland and South Africa, homelessness and child poverty in Glasgow. “I want to do good work and I still think that good pictures and good journalism do make a difference, even if it is only about raising awareness.”

Copyright infringements abroad and how to manage them ► Getty move to scrap RM sales ► ► Christmas at York Minster by Duncan Lomax ► Photographing in public places - where/when/is it allowed? ►