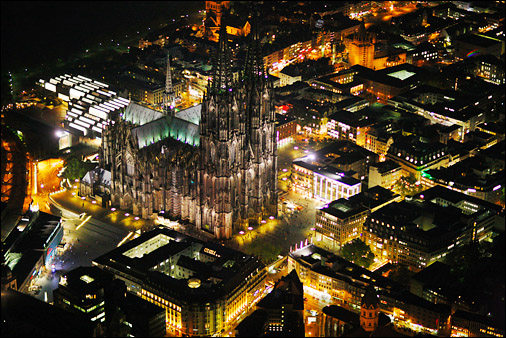 Shooting night photography is quite a challenge. Normally one would use a long exposure and a tripod, however from a moving flying machine this is not possible. Even a helicopter hovering in mid air has a significant amount of movement.

Needless to say my pilot for this shoot thought I was mad and the radio request to enter the Cologne Air Traffic Zone was met with considerable surprise. Although the target was Cologne, we began our journey some distance away as it had been difficult to find a pilot willing to try a night photo flight. We also needed an airfield that would stay open specially for us.

We took off and flew along the Rhine which glinted in the moonlight and when we reached Cologne the view of the city basking in a shimmering golden light was simply breathtaking. The spectacle on these night flights is worth every penny I have ever spent on flying.

Technically, my approach was not very sophisticated, I simply turned everything on the camera to maximum. The problem was that even at maximum aperture and ASA the shutter speed was only 1/80 second. I had also set myself a challenge in that, as I was funding the flight myself, I had to use a light aircraft rather than an expensive helicopter. That meant I would be shooting a black building at night while travelling at 100mph.

Then there was another challenge. The cathedral was surrounded by upward facing spotlights which were shinning directly into my lens. Fortunately as we flew round the cathedral the spotlights were hidden by the spire for a couple of seconds every few degrees of our orbit.

After the flight there was a tense journey home. The mission had cost a sizable sum and it was only when I got the images up on a computer screen that I was sure it had been mission accomplished.

Jonathan Webb is a specialist aerial photographer working in Great Britain and Germany. He has published 12 books on aerial photography in the last five years. In 2008 he was awarded the distinction of ‘Associate’ by the Royal Geographical Society. In 2010 and 2011 Jonathan took part in the Britain From The Air street exhibition in Bath and Oxford. Jonathan runs the Webb Aviation web site which, with 5000 visitors a day, is one of the worlds most popular aerial photography websites.