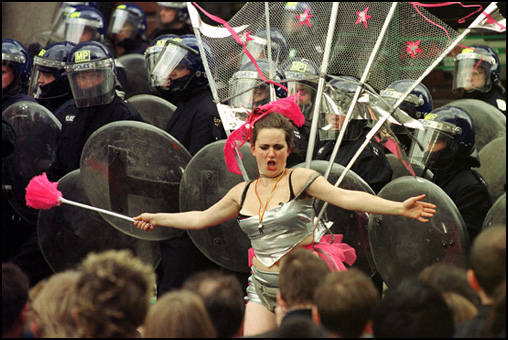 This image took quite a bit of patience, effort and daring on my part. I was covering the anti-globalisation demo in central London and, early in the day, I had spotted this young woman protester dressed up as a fairy, thinking she might make a good picture.

The demo – and the tempers – eventually started to heat up and the confrontation between protesters and police reached its climax; the two camps were facing each other, with protesters hurling abuse at the police, who in turn were threatening to launch their assault. Photographers were struggling to find a vanguard point from where to shoot.

Suddenly, the scantily-dressed fairy surged out into “No Man’s Land” and started to dance and taunt the police, cheered on by demonstrators.

With two cameras around my neck and a heavy rucksack on my back, I had to quickly climb up a lampost so I could get an uncluttered view of the scene. Once high up enough, I struggled to stay there and managed to shoot half a dozen frames with a long lens, hoping that they wouldn’t end up all blurred !

The fairy retreated quickly as the police started charging into the protesters. I don’t know how, but I managed to stay up on the lampost until things cooled down underneath me.

This image is the best of the five frames that I shot. I think it is successful because all the parties involved in the demo are included in the frame and it is tightly composed, with the fairy being the only colourful subject bang in the middle. It wasn’t used the next day but it has since been published many times, here and abroad, through my main agent REX FEATURES.

Philippe Hays is entirely self-taught and became a professional photographer in 1994, working as a freelance. Regular clients include The Guardian & Observer and The Times. He is represented by REX for whom he shoots news, features work, celebrities and general stock. He really enjoys shooting environmental issues and this area of his work is represented by agency STILL PICTURES.

Philippe also shoots for PR companies, does the odd commercial job and some weddings in order to supplement his income from editorial photography.