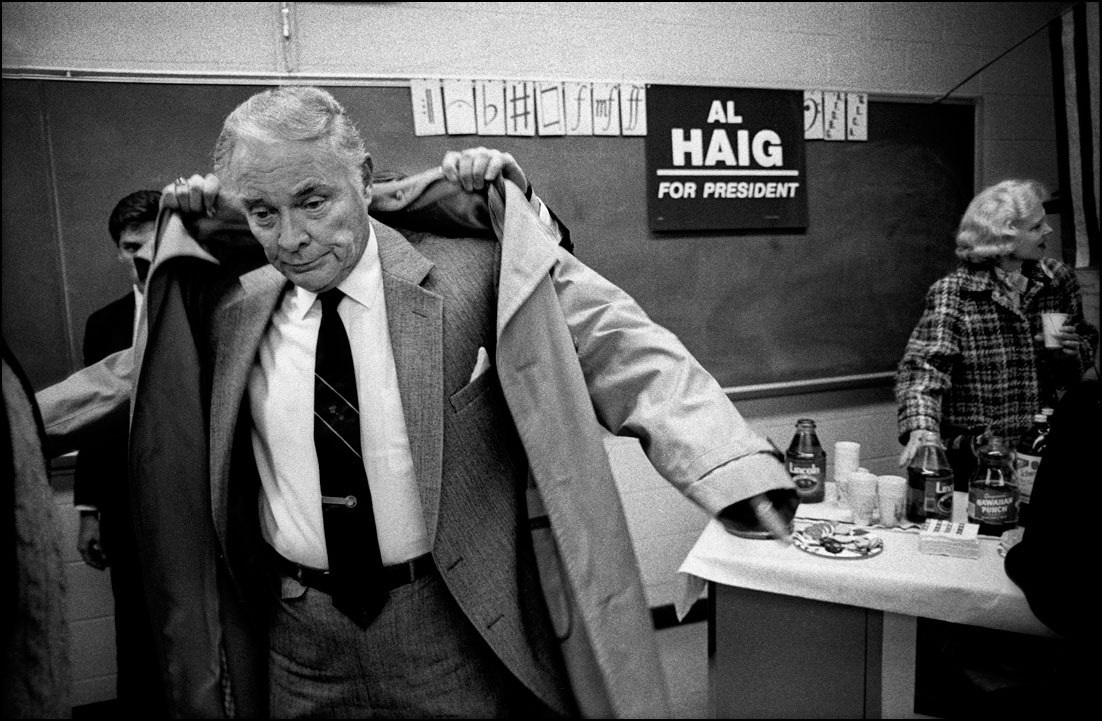 US Presidential Candidate Al Haig bows out of the race for the White House, New Hampshire, February 1988. By Brian Harris

​​The New Hampshire US Presidential Primaries take place every four years and the election results are considered to be the most important indicator of who the next US President is likely to be.

I was covering my first US Presidential campaign in 1988 for The Independent newspaper and as it was an open election without a sitting President there were about a dozen hopefuls from both sides of the political divide. The likes of Republican candidates Bob Dole and Pat Robinson, George HW Bush and Alexander Haig were going head-to -head with Democrats Michael Dukakis and Richard Gephardt, Jessie Jackson and Al Gore as well as many other also-rans. Thirty years ago, you would just phone a candidate's office based in either Concorde or Manchester and get their running order for the day, show up and cover the event. Normally there would be a couple of breakfast meetings from both camps, maybe a mid-morning visit or two to the local fire or police station followed by a lunchtime business meeting with some street work and flesh-pressing in the early afternoon. The big rallies were in the evening and made for TV evening news.

One afternoon after standing in the snow for some hours the Republican Candidate Alexander Haig came up to me and introduced himself…he had found out I was the ‘limey’ photographer and as a bit of an anglophile he was interested in what I was doing and how I found American politics compered to that in the UK. He was very friendly, arm around the shoulder kinda stuff, and he invited me to an evening private house meeting where he said I would get a good story.

The meeting was way out in the ‘boonies’ of snowy New Hampshire, very quiet and intimate, glasses of sherry and canapes…all terribly civilised. I was one of very few press in attendance.

The room went quiet and Haig spoke, quietly and with some emotion as he announced that he was standing down from the White House race and would be supporting George HW Bush instead…and with that he turned on his heels to collect his coat from the lobby with me in close attendance…and that is when I made this one frame, a dejected man having his coat put on for him, bowing out of his one and only grab for White House glory…but what makes the picture for me is his wife is in the background drink in hand seemingly oblivious to what had happened.

Al Haig was the White House Chief of Staff under Presidents Nixon and Ford and Secretary of State under President Regan, and was also Supreme Allied Commander Europe after his military career came to an end. After the attempted assassination of President Regan in 1981, Haig asserted "I am in control here"; except of course he wasn't. All in all, quite a tour de force and potentially a President in the making for real.

For those interested in real-life West Wing shenanigans here is a Wikipedia summary of what happened after Reagan was shot: Following the March 30 assassination attempt on Reagan, Haig asserted before reporters "I am in control here" as a result of Reagan's hospitalization, indicating that, while President Reagan had not "transfer[red] the helm", Haig was in fact directing White House crisis management until Vice President Bush arrived in Washington to assume that role. "Constitutionally, gentlemen, you have the President, the Vice President, and the Secretary of State in that order, and should the President decide he wants to transfer the helm to the Vice President, he will do so. He has not done that. As of now, I am in control here, in the White House, pending return of the Vice President and in close touch with him. If something came up, I would check with him, of course." (Alexander Haig, autobiographical profile in Time magazine, April 2, 1984[29]) Haig was incorrect: The US Constitution, including both the presidential line of succession and the 25th Amendment, dictates what happens when a president is incapacitated. The Speaker of the House (at the time, Tip O'Neill, Democrat) and the President pro tempore of the Senate (at the time, Strom Thurmond, Republican), precede the Secretary of State in the line of succession. Haig later clarified: "I wasn't talking about transition. I was talking about the executive branch, who is running the government. That was the question asked. It was not, 'Who is in line should the President die?'" (Alexander Haig, interview with 60 Minutes II April 23, 2001)

I write about my time covering American politics and much more in my book "...and then the Prime Minister hit me"

Brian Harris has been a photographer for the past 49 years and is still going strong. He started taking pictures of his school sports day and getting them published in his local papers in Romford Essex in the late 1960’s. While still at school he photographed local football matches for the local press as well as babies, weddings and family social events. He joined Fox Photos as a runner in 1969 before moving up the food chain via assisting and becoming a 'made up operator’ where he photographed Royals, exhibitions and general news. He joined the Newham Recorder before freelancing for The Times, Sun, News of the World,UPI and the BBC.

He joined the staff of The Times in ’76 covering general news including the end of the civil war in Rhodesia (now Zimbabwe ) and the famine in Sudan and Ethiopia. He resigned from the Times in 1984. He then freelanced for the American and European magazine market and in 1986 joined The Independent Newspaper where he travelled the world and helped to formulate the ‘Indy’ style. He was made redundant from the Indy in 1999 and has worked for himself ever since.

In 2006-07 Harris helped to produce by 'Remembered' for the Commonwealth War Graves Commission, and for the past few years has been writing and producing his memoirs; '...and then the Prime Minister hit me' available direct from BH or Amazon. He lives near Cambridge in East Anglia.

Copyright infringements abroad and how to manage them ► Getty move to scrap RM sales ► ► Christmas at York Minster by Duncan Lomax ► Photographing in public places - where/when/is it allowed? ►